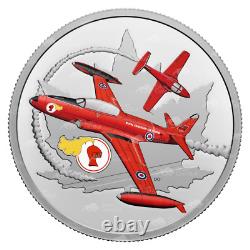 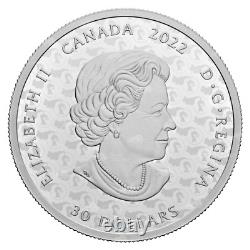 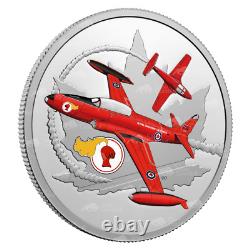 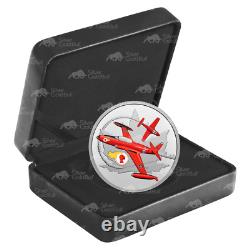 4+ tube of Silver Coins. The Red Knight's aerobatic performance is on display once more. Before the Snowbirds, there was the Red Knight! From 1958 until 1969, the Red Knight delighted spectators across Canada and the United States with awe-inspiring aerobatic displays. The Royal Canadian Air Force's (RCAF) solo jet-aerobatic performer was equipped with the T-33 Silver Star (or "T-Bird", CT-133) and later, the CT-114 Tutor, which were decked out in a bright colour scheme, iconic red.

These aircraft, along with the distinctive knight's helmet emblem they bore, have been colourfully recreated on this 99.99% pure silver tribute to the legendary (and much loved) Red Knight, whose show-stopping manoeuvres inspired a generation of air enthusiasts and enriched Canada's aviation heritage. Celebrate the Red Knight's storied history. SPECIAL FEATURES: A salute to the Red Knight. This coin pays tribute to the Red Knight's legacy, and to its outstanding contribution to the RCAF and Canadian aviation history. The Royal Canadian Mint's first Red Knight coin.

The stories of Canadian aerobatic display teams-including the Snowbirds and Golden Hawks featured on previous coins-are connected to one another. This coin shines the spotlight on the Red Knight, which has never been depicted on a Canadian coin. The colour-over-engraved elements make a vivid impression on the coin's reverse, where they're set against the maple leaf backdrop and surrounded by a mirror finish.

For an extra touch of drama, a more matte frosting sets the Red Knight's white smoke trails apart! Why are two planes featured on this tribute to the RCAF's solo performer?

The aircraft on the coin's reverse represent the two aircraft types that each served as the mount of the Red Knight: the T-33 from 1958 to 1968, and the Tutor in 1968 and 1969. The maple leaf backdrop is also historic: it is based on the pre-1965 RCAF Roundel, which can be seen on the T-33's fuselage and wings in this design. If you missed out on the RCM's 2021 Snowbirds and Avro Arrow coins, or if you're looking for another aviation-themed piece to include in your collection, this is the coin to get in 2022!

But mintage is limited to just 6,500 coins, so don't wait-order today! The Royal Canadian Mint certifies all of its collector coins. VINTAGE COLOURS The Red Knight's bright paint scheme and markings made it easy to spot, and its distinctive red colour has been recreated on this selectively coloured coin which has been crafted in 2 oz.

Of 99.99% fine silver. INCLUDES RED KNIGHT EMBLEM The emblem of the Red Knight is also featured on this coin! The Red Knight's helmet with golden plume was displayed on the aircraft's nose from 1961 to 1969. The emblem is also subtly laser-engraved on the coin's obverse, where this repeating element catches the light when the coin is tipped.

Four T-33 aircraft were part of the Red Knight program from 1958 to 1968. One of them, RCAF serial 21574 (1961 to 1964), is on display at the Canada Aviation and Space Museum in Ottawa, Ontario, where you can get a close view of its day-glo red paint scheme and the Red Knight emblem on its nose-that emblem also appears on this coin!

Another of the original Red Knights, serial 21630, is on display in Saskatoon and there are several other tributes to the Red Knight across Canada. The last remaining Tutor to have served as the Red Knight, RCAF serial 26153, is now on display in its original Golden Centennaires colours at the CFB Borden Museum. A few variations on the standard Red Knight colour scheme were introduced through the years-for example, the Tutor was painted vermillion red (instead of the original day-glo red) and had a white line that stretched from nose to tail. As for the Red Knight insignia, it started out as a black silhouette of a knight's helmet in 1959; the more colourful version, the one reproduced on the coin's reverse, was introduced in 1961 and served as the emblem for the remainder of the Red Knight program. The CT-114 Tutor is the same aircraft type that is currently used by the Canadian Forces Snowbirds, 431 Air Demonstration Squadron.

The Red Knight was among the 2020 inductees to Canada's Aviation Hall of Fame (CAHF) as the recipient of the Belt of Orion Award for Excellence, a well-deserved honour. DESIGN & ARTIST Each coin's reverse was designed by artist David Oram and pays tribute to the Red Knight, the Royal Canadian Air Force Training Command's famous aerobatic performer from 1958 to 1969. Historical liaison was provided by authors J.

To represent that timespan, the Canadair-built T-33 Silver Star is shown performing a manoeuvre alongside its eventual replacement, the Canadair-designed and built CT-114 Tutor (background). Accompanied by the red, gold and white Red Knight emblem, both aircraft are painted in their distinctive red colour schemes of the 1960s and set against the RCAF Roundel's (pre-1965) maple leaf. The obverse features the repeating laser-engraved Red Knight emblem and the effigy of Queen Elizabeth II by Susanna Blunt. About the Red Knight A forerunner of the Canadian Forces Snowbirds, the Red Knight originated in Trenton, Ontario, and was active from 1958 to 1969. Although it was originally authorized to perform in just three air shows, the Royal Canadian Air Force Training Command's solo aerobatic performer proved to be a hit with spectators and went on to make more than 600 air show appearances throughout its 12-year run.

Its ability to perform manoeuvres within the confines of an airfield made it well suited for air shows in small communities and venues that could not accommodate larger display teams. For the first three years, the Red Knight consisted of a single aircraft, a pilot and a support technician. Ultimately, a total of 17 pilots and two aircraft types-the T-33 from 1958 to mid-1968 and the Tutor in 1968 and 1969-took up the mantle of the Red Knight. The base of operations moved to RCAF Station Saskatoon in 1959, RCAF Station Portage la Prairie in 1961 and RCAF Station Moose Jaw in 1964 before returning to CFB Portage la Prairie in 1967. At the end of that air show season, the Red Knight was awarded the Centennial Medal for its "valuable service to the nation" after completing more than 100 performances, including flypasts and air shows alongside the Canadian Armed Forces Golden Centennaires during Expo 67.

Budget cuts and a fatal accident resulted in the program's untimely cancellation in early 1970. But the Red Knight will always hold a special place in Canadian aviation history as a prolific performer and one of the longest-running military aerobatic displays-in fact, its total number of performances is third only to today's Snowbirds and CF-18 solo aerobatic displays which have been ongoing since 1971 and 1983 respectively. One of my fondest childhood memories was attending airshows and seeing the various aircraft that would perform in front of us and thousands of other spectators. Although I never saw a Red Knight perform, those early experiences provided inspiration for my coin design. I really wanted the airplane to stand out in its brilliant red paint scheme, while making sure the Red Knight insignia was clearly visible. It was fascinating to learn more about the aircraft and the history of the Red Knight while developing this design! " DAVID ORAM, ARTIST "I had never heard about the Red Knight before! The moment I learned about the Red Knight, I was immediately intrigued and excited to learn more.

Being a person who is naturally drawn to vintage subject matter, the Red Knight's story and imagery captivated me. It was a true honour to bring this story onto a coin and I believe the team did a great job telling it! " MATT EGGINK, PRODUCT MANAGER "All of the Red Knight pilots were flying instructors; the forty hours of practice required to reach maximum performance levels had to be flown after regular working hours or on weekends.

Being selected as a Red Knight was a two-year commitment; the first year spent as the alternate pilot, flying the spare aircraft, acting as commentator, or standing-in for the Red Knight in times of illness or when scheduling conflicts occurred. These small Red Knight teams, consisting of from two to five men, received very limited support. This coin is a wonderful tribute to the pilots, and their crewmen, for those thrilling aerobatic displays performed wherever they travelled. Throughout its 12-year tenure, the Red Knight was an inspiration to countless millions of spectators, its striking paint scheme a magnet to young and old alike. Many budding aviators like myself who marvelled at the Red Knight eventually joined the Snowbirds or performed as CF-18 demo pilots to carry on the legacy of Canada's rich airshow heritage.

It was thus most fitting to see the Red Knight inducted into Canada's Aviation Hall of Fame and now to be honoured by this beautiful commemorative coin. DEMPSEY, CD, LIEUTENANT-COLONEL (RET'D), AUTHOR OF "A TRADITION OF EXCELLENCE, CANADA'S AIRSHOW TEAM HERITAGE" PACKAGING Each coin is encapsulated and presented in a Royal Canadian Mint-branded clamshell with a black beauty box. ABOUT THE ROYAL CANADIAN MINT The Royal Canadian Mint is known as one of the most reputable mints in the world. The Ottawa Branch of the Royal Mint opened in 1908 and was renamed The Royal Canadian Mint in 1931 when control was transferred to the Canadian government. The Royal Canadian Mint is renowned for producing some of the highest quality and purity of gold and silver bullion coins and bars in the world. Their high standards for excellence and quality allowed them to be the first refinery to manufacture 9999 fine gold bullion coins in 1982, as well as the first to reach 99999 fine gold purity in 1999. We may request for photo identification and other documentation before we confirm your order and begin packaging the item.

This item is in the category "Coins & Paper Money\Bullion\Silver\Coins". The seller is "silvergoldbull" and is located in this country: CA. This item can be shipped to Canada.