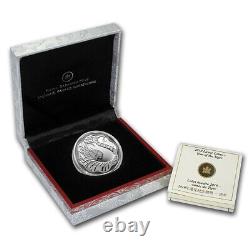 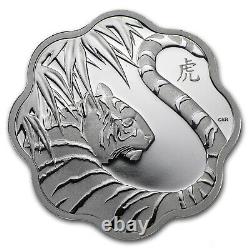 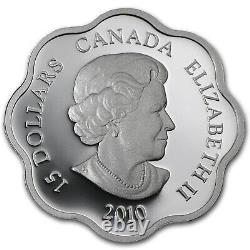 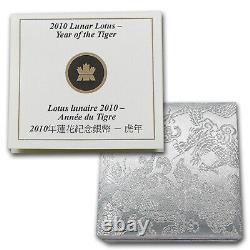 Photos in this listing may or may not be stock photos. The photos are meant to be an indication of the product you will receive. Mintage of only 48,888 coins! The obverse shows Susanna Blunt's design of Queen Elizabeth II of England. 86 oz of pure Silver and comes attractively housed in the original box of issue with a certificate of authenticity.

The Chinese lunar calendar was first introduced by Emperor Huan Ti in 2637 BC. The calendar consists of a 12-year cycle, with each year featuring a different representative animal. There are legends about how the zodiacs were chosen. The character of each animal is believed to influence the events and political and economic conditions of its year, as well as the personality of individuals born during its cycle. The year 2010 is ruled by the Tiger. One of the most dynamic signs in the Chinese zodiac, Tigers are by turns fascinating, commanding, and exasperating. They are patient but short-tempered, calm but rebellious, petty but noble, fearsome but affectionate, free spirits but fiercely territorial. With their many & various personality traits, Tigers are also - not surprisingly - noted for a marked reluctance to make up their minds.

What makes them magnetic and commanding figures is the absolute loyalty and affection they show for those they love. With a natural air of authority, Tigers easily earn the respect and admiration of those who love them in return. While domesticated Tigers are quite happy among familiar surroundings, they are just as apt to fly off on an adventure at a moment's notice.

Unpredictable and emotional, they can become quite fearless when standing up for themselves or others, and often hold definitive views on how to right the wrongs of society. At work, Tigers show natural leadership ability, but prefer to work alone. They usually excel as business managers, social activists, explorers, or travel writers. The year of the Tiger also ruled 1902, 1914, 1926, 1938, 1950, 1962, 1974, 1986, and 1998.

However, people born in January or February should consult the Chinese lunar calendar. New Year does not automatically fall on January 1st. This celebration is better known as the Spring Festival and coincides with the first day of spring - a date that shifts from year to year depending upon the lunar cycle and solar year. 1,359 Item as described.

Rec'd item, looking forward to doing business with again. This item is in the category "Coins & Paper Money\Bullion\Silver\Coins". The seller is "apmex" and is located in this country: US. This item can be shipped worldwide.