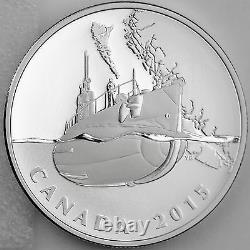 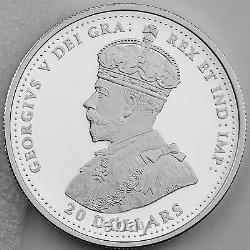 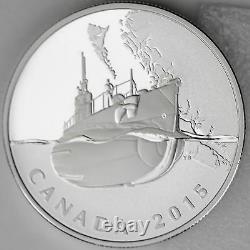 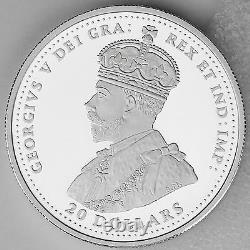 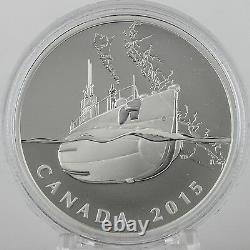 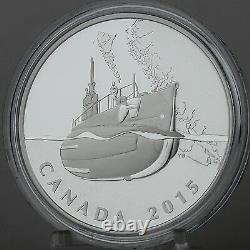 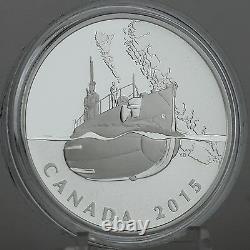 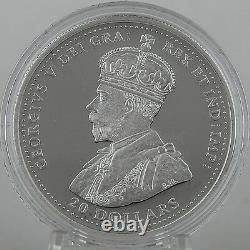 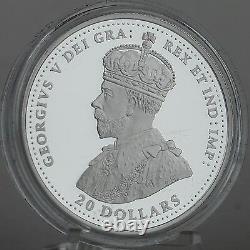 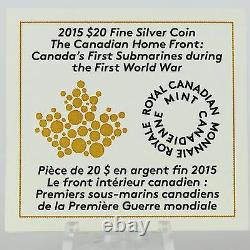 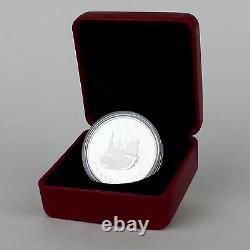 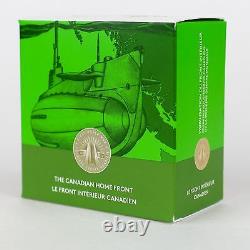 99.99% Pure Silver Proof Coin. All coins offered in this listing are unsearched! All of our Canadian coins are acquired directly from the Royal Canadian Mint - The counterfeiting of numismatic coins, and the sale of stolen coins, are serious problems for coin collectors and dealers. Unlike many other coin dealers.

To protect against these risks, we do not sell'second-hand' coins. All of our Canadian coins are stored in a climate controlled, smoke-free vault. Composition - silver (99.99% pure).

On the eve of the First World War, the Royal Canadian Navy was still in its infancy with fewer than 350 sailors to its name, and a fleet that centered around two aging cruisers. The looming threat of war heightened fears about a possible enemy naval threat, particularly in British Columbia; but a unique opportunity in the summer of 1914 would allow Canada to acquire its first submarinesone of which is depicted in this stunning coin. In the summer of 1914, amidst increasing concerns about Canadas defensive vulnerabilities, a unique opportunity came to the attention of Sir Richard McBride, the Premier of British Columbia. McBride saw these as valuable contribution for the fleet stationed on the West Coastnot to mention a boon to his provinces coastal defenses.

A flurry of meetings and negotiations ensued, but timing was of the essence: a declaration of war was imminent, and the United States own pending declaration of neutrality would prevent the sale of military provisions to countries at war, which would include Canada. On August 4, 1914, just hours before war was declared, the submarines quietly slipped out to sea under the cover of darkness and fog, and arrived at Esquimalt, B.

On the morning of August 5. The affair was conducted so quickly that a formal approval had not yet been received from Ottawa, although Prime Minister Robert Borden would later telegraph a congratulatory message to McBride: we appreciate most warmly your action which will greatly tend to increase security on the Pacific coast... This commemorative coin is a beautiful addition to any military, naval or history-themed collection! The second coin in the Canadian Home Front series, which highlights the war effort on the Canadian home front across the country.

Finely detailed engraving recreates Canadas first submarine, which was acquired in August 1914 to help bolster Canadas defense of its West Coast. As with all coins in the series, the reverse design features a regional map in the background which provides geographical context to the story. Struck in 99.99% pure silver with a limited mintage of 7,500.

For our Canadian customers, this coin is GST/HST exempt. The reverse design by Yves Bérubé highlights the importance of the addition of two submarines to the Royal Canadian Navys fleet in August of 1914.

The CC Class submarine is prominently featured in the center of the image, its hull pointed forward towards the viewer as though emerging from the image. The vessels keel and diving planes can be seen below the surface of the water; above, a sailor stands on the deck in front of the conning tower as he surveys the horizon. In the background to the right of the submarine, a beautifully detailed map of British Columbias coastline looms large; this added element provides geographical context to the story of Canadas first submarines, which were used to patrol the coastline depicted here. The CC-1 and CC-2 were designed to reach speeds of 13 knots at the surface and 10 knots when submerged; their displacement measured 313 tons when surfaced and 421 submerged. The CC-1 measured nearly 44 meters long (144 feet in length) with five torpedo tubes; with its tapered bow, the CC-2 was longer in length at just over 46 meters (or 152 feet) long and had three torpedo tubes.

Neither submarine had a deck gun, which meant torpedoes were their only weapon. Unfortunately, these werent included in the sale and had to be sent across the country from Halifax!

In 1917, the CC-1 and CC-2 were the first warships of the British Empire to pass through the Panama Canal. Each coin is encapsulated and presented in a Royal Canadian Mint-branded maroon clamshell protected by a custom graphic box. Unsearched All of the coins offered in this listing are unsearched. Many coin dealers search all coins when they are received from the Mint. They "cherry-pick" the best coins.

Then submit them to be graded, certified, and slabbed by PCGS, NGC, ANACS, etc. When a dealer searches coins, those that they sell in original Mint packaging are only lesser quality coins. Photos: When a listing offers multiples of the same coin, one coin is picked at random and photographed. Since all coins offered in that listing are essentially identical, the coin photographed is representative of all coins offered.

Surface areas that appear black on some proof coin photos are actually highly polished, mirror-bright metal reflecting the color of the camera. Whenever possible, we use actual photos of our coins, rather than just artists conception drawings from the Mint. We frequently update and upgrade the photos that appear with our listings, using improved cameras and lenses and better lighting. We will honor your requests for additional photos as quickly as our schedule permits.