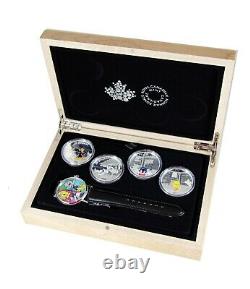 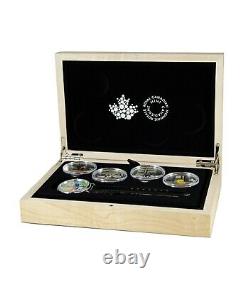 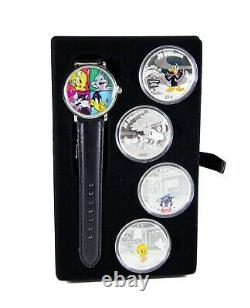 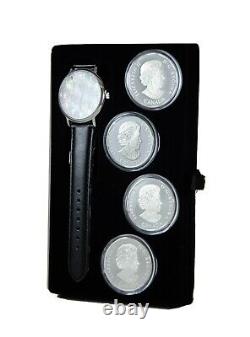 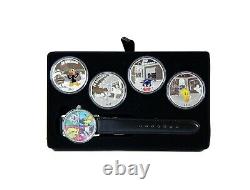 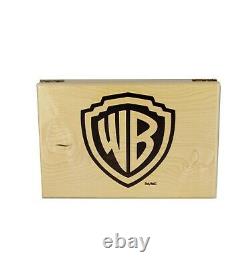 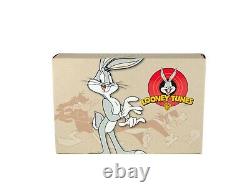 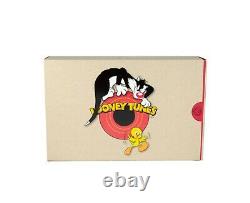 9999 Silver Colourized 4-Coin Set with Bonus Wrist Watch RCM. From 1942 until the late 1960s, Looney Tunes were the most popular animated shorts to be shown in film theatres. But as the golden era wound down, television would be the one to keep the laughs going by introducing the characters and their (mis)adventures to new generations. In keeping with the playful nature of Looney Tunes, each coin features a hidden surprise element-look closely. Depicts a typical scene from Looney Tunes cartoons which featured Tweety.

The little yellow canary with the oversized head and the large blue eyes stands in the centre of the image field, clearly alarmed as he bounces up and down while pointing to the right. His beak is open as though he is saying his catchphrase, "I tawt I taw a puddy tat. He did see a puddy tat!

There, just reaching in on the right side of the image, is Sylvester's outstretched paw as the persistent alley cat tries once more to ensnare his feathered foe. Depicts a scene from a Looney Tunes cartoon featuring Sylvester with Tweety. With a rascally expression, Sylvester quietly peers up from the bottom edge of the image field, allowing the viewer a close glimpse of the black and white cat's facial features such as his red nose. Sylvester is clearly plotting to capture his favourite target, Tweety, who seems oblivious to the feline's intent as he happily swings inside his bird cage in the background. Depicts a scene from the Duck Season/Wabbit Season trilogy of cartoons. In the foreground, rich colouring brings the black-feathered, orange-billed Daffy Duck to life as he fixes a red bowtie. Expert engraving is enhanced by the use of multiple finishes, bringing to life the forest setting and the sign to the left of Daffy, which reads Duck Season/Chasse au canard.

But trouble looms as an engraved rendering of Elmer Fudd in his hunting clothes can be seen approaching on the right side of the image. Depicts a scene inspired by the Duck Season/Wabbit Season trilogy of cartoons. In the foreground, Bugs Bunny emerges from his warren in full colour, with greys, whites and pinks, recreating the iconic character's colouring.

Expert engraving is enhanced by the use of multiple finishes, bringing to life the forest setting and even Bugs' mailbox, upon which is written B. But trouble looms as an engraved rendering of Elmer Fudd in his hunting clothes can be seen approaching on the left side of the image. Composition : 99.99% pure silver. We send out US orders containing US and Canadian coins or notes when the total is.

We make weekly trips, however. Unforeseen circumstances do pop up. If you have any issues reach out to us directly and we'd be happy to discuss it further. Or cancel the order at your request. Thank you for your patience.

Please wait for us to send you an invoice. For in-person pick-up we also accept cash or Interac. This item is in the category "Coins & Paper Money\Bullion\Silver\Coins".

The seller is "jandm-coin-jewellery" and is located in this country: CA. This item can be shipped to Canada, United States.