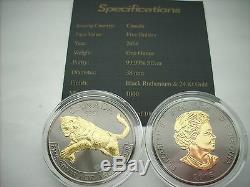 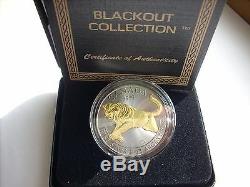 999 SILVER ROYAL CANADIAN MINT COUGAR COIN. 1ST IN THE PREDATOR SERIES. THIS COIN HAS BEEN FINISHED IN BLACK RUTHENIUM AND 24KT GOLD ACCENTS DONE ON BOTH SIDES OF THE COIN. Struck from 1 oz silver. 999, the coin is FULLY plated with Black Ruthenium and then finished in 24K gold.

The coin is coated with Black Ruthenium, one of the platinum metals that looks like platinum but is rarer. Enhancement has been done by a private mint in the US.

Like the other metals of the platinum group. Investors are accustomed to seeing animals from the Canadian wilderness on coins from the Royal Canadian Mint, especially the cougar. The largest wild cat in Canada has featured on Canadian Maple Leaf coins as a privy mark and even appeared on its own coin in the Canadian Wildlife Series. 9999 pure silver coins from RCM depict the cougar in a manner never-before-seen on a Canadian coin. Cougars are elusive and silent hunters, pouncing on their prey before the unsuspecting creature knows what is happening.

The cougar is the worlds fourth largest cat, and is known in the Western Hemisphere by other names such as the mountain lion and puma. On the obverse face of these all-new coins youll find the familiar right-profile portrait of Queen Elizabeth II, as created by Susanna Blunt in 2003. Her Majestys effigy is surrounded by engravings that include her name, the phrase D. The reverse face of the 2016 1 oz Canadian Silver Predator Cougar Coin features one of the elusive cats as it leaps down from a rockface onto its unsuspecting prey below. Engravings include the year of issue and nation of issue above, as well as the face value of the coin below.

The Royal Canadian Mint is releasing a new series of four silver coins known as the Predator Series, and the Cougar coin is the first release. You can expect these coins to sell out fast and generate immense interest, just as other first-release coins from RCM have done in the past. 999 ROYAL CANADIAN MINT SILVER COIN.