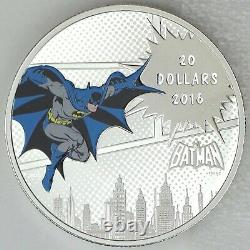 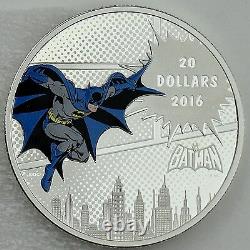 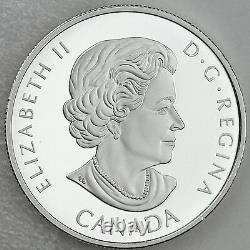 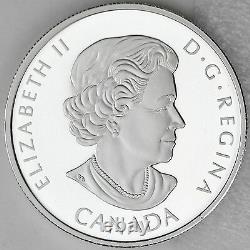 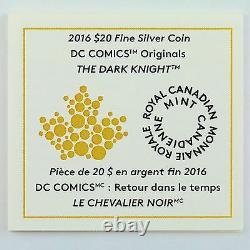 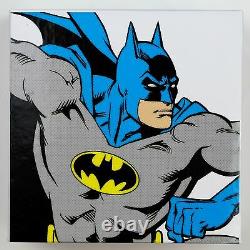 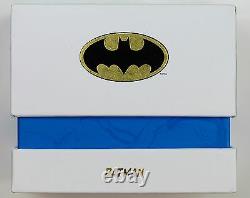 Face value - 20 dollars (a legal tender Canadian coin). Artists - DC Comics (reverse), Susanna Blunt (obverse). Atop a GOTHAM CITYTM rooftop, BATMAN surveys his city; night after night, the CAPED CRUSADER protects GOTHAM CITY from the worst criminal underworld in the DC COMICS universe. Pitted against the likes of The Penguin, The Riddler, Two-Face, and Batman's arch nemesis, The Joker, the DARK KNIGHT is the pinnacle of strength, resolve and cunning. This coin makes a wonderful gift for any fan of comic books! Canadian superstar creators Jason Fabok, Darwyn Cooke, Yanick Paquette, and Francis Manapul have all helped to shape the history of BATMAN as artists/writers! THIRD AND FINAL COIN IN THE SECOND WAVE OF DC COMICS ORIGINALS SERIES!

A tribute to DC Comics' greatest SUPER HEROES presented in their classic form! The application of blue, grey and yellow coloring over the detailed engraving recreate his iconic costume and symbol, while the alternating shades of blue and black add shadowing to his bat-like webbed cape.

The classic BATMAN logo is also included in this coin's design. A laser halftone pattern adds a modern graphic element that fills the background while infusing the entirety of the design with a classic comic book feel. 99.99% PURE SILVER COIN! For our Canadian customers, this coin is GST/HST exempt!

This coin mimics a comic book splash page with its engraved rendition of BATMAN. With arms outstretched and knees bent, BATMAN fearlessly soars into action against the GOTHAM CITY skyline.

The application of blue, grey, and yellow coloring over the detailed engraving recreate his iconic costume and symbol, while the alternating shades of blue and black add shadowing to his bat-like webbed cape. To the far right, the classic BATMAN logo is engraved just above the skyscrapers, while a laser halftone pattern adds a modern graphic element in the background that infuses the entirety of the design with a classic comic book feel. The 1940s saw many important elements introduced into Batman's story, including the first-time appearance of GOTHAM CITY in Detective Comics #48 (February 1941) and the first use of the BAT-SIGNAL a year later in Detective Comics #60 (February 1942). SUPERMAN only entrusts one person with a kryptonite ring, should he go rogue. Deep in the vaults of the Batcave, BATMAN holds this kryptonite ring and SUPERMAN can rest easy knowing his best friend will never misuse it.

Despite being known as a solitary hero, BATMAN has a team of allies in his fight against the criminal underworld. These SUPER HEROES include ROBIN and BATGIRL, but also Police Commissioner James Gordon and his most trusted ally, butler Alfred Pennyworth. Each coin is encapsulated and presented in a Royal Canadian Mint-branded premium graphic case. So our costs for Canadian coins also vary from day to day.

Since all coins offered in that listing are essentially identical, the coin photographed is representative of all coins offered. Surface areas that appear black on some proof coin photos are actually highly polished, mirror-bright metal reflecting the color of the camera.

We often include proof coin photos with the coin slightly tilted to better depict the mirror bright surfaces. However, tilting the coin may resulting one side being slightly out of focus. Whenever possible, we use actual photos of our coins, rather than just stock artwork from the Mint.

We frequently update and upgrade the photos that appear with our listings, using improved cameras and lenses and better lighting. We will honor your requests for additional photos as quickly as our schedule permits. The item "2016 $20 DC Comics Originals Dark Knight, Batman, 1 oz Pure Silver Color Proof" is in sale since Monday, October 3, 2016. This item is in the category "Coins & Paper Money\Coins\ Canada\Commemorative".