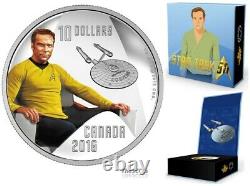 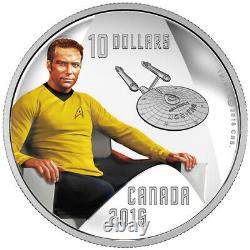 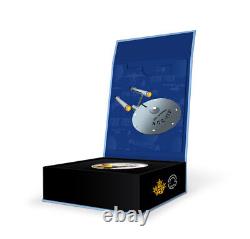 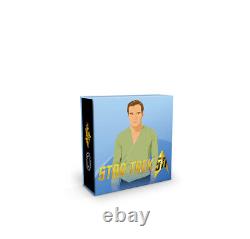 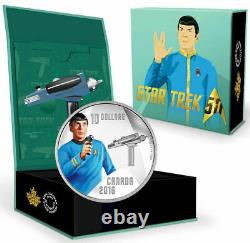 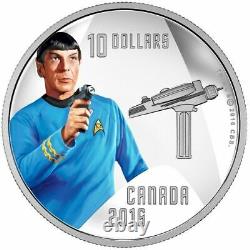 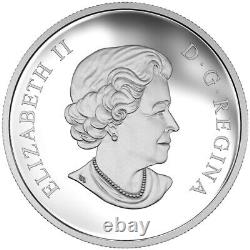 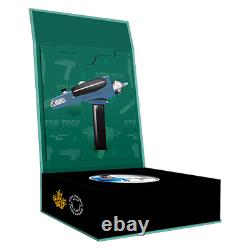 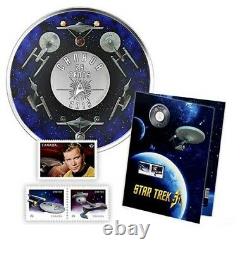 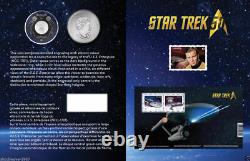 From warp drives to teleporters, U. Enterprise (NCC-1701) has offered us an exciting vision of what space travel could entail in the 23rd century. Celebrate the 50th anniversary of Star Trek-a television series that is beloved by generations of Canadians, and whose vision of the future helped inspire innovation in our time! FIRST of four coins featuring some of the most beloved Star Trek characters, paired with unforgettable Trek technology that has inspired real-life innovation.

The design is an outstanding testament to the craftsmanship of the Royal Canadian Mint! Contrasting finishes enhance the intricate engraving, while vibrant selective colour captures the likeness of each character. Your coin is encapsulated and enclosed in a stunning custom box! Durable yet lightweight, the colourful packaging boasts a contemporary design and features an illustrated portrait of Captain Kirk alongside the Star Trek 50th anniversary logo. A one-of-a-kind addition to any collection and an unforgettable gift that will be treasured and valued by the Star Trek fan in your life!

On the left side is the coloured image of Captain James T. Kirk (portrayed by Canadian actor William Shatner) in a gold-coloured uniform as he commands the crew from his chair on the bridge.

To the right, the U. Enterprise is painstakingly recreated in extraordinary detail, thanks to intricate engraving along its saucer-shaped hull and twin warp nacelles. The two elements casually overlap the outline of Starfleet's Delta Shield Insignia engraved in the background. No: 153321 Mintage: 12,500 Material: Pure Silver (99.99%) Finish: Proof Weight: 15.87g Diameter: 34mm Edge: Serrated Certificate: Serialiazed.

His alien origins reinvented a small community in Alberta, while his iconic salute and unique wisdom have made him one of the most respected characters of the Star Trek universe. As the Royal Canadian Mint celebrates the 50th anniversary of Star Trek, this fine silver coin pays tribute to the wisdom of Spock and features the futuristic phaser introduced in The Original Series. Fourth and FINAL coin in a series that pairs some of the most beloved Star Trek characters with unforgettable Trek technology! Contrasting finishes enhance the intricate engraving, which brings the Trek tech to life in outstanding detail, while vibrant selective colour captures the likeness of each character. Durable yet lightweight, the colourful packaging boasts a contemporary design and features an illustrated portrait of Spock alongside the Star Trek 50th anniversary logo.

The reverse design features selective colour and detailed engraving in the side-by-side depiction of a beloved Star Trek character with famous Trek technology. To the left is a portrait of First Officer Spock (portrayed by actor Leonard Nimoy) wearing a blue Starfleet uniform and in a state of alert, as he points his phaser pistol toward an unseen threat. To the right, an engraved depiction of the futuristic weapon offers the viewer a closer glimpse of the phaser pistol that was introduced in The Original Series.

As the series celebrates its 50th anniversary, the Royal Canadian Mint presents an unforgettable coin and stamp set that pairs a coin with three collectible stamps by Canada Post, all presented in commemorative packaging. Join the celebration as the Star Trek television series marks its 50th anniversary!

Beloved by Canadians, this sci-fi phenomenon is widely credited with inspiring innovation in our time. Own your very own Enterprise! This special set includes a Star Trek-themed coin and three collectible stamps, all in one unforgettable package. A must-have for fans: This affordable collectible is a unique opportunity to add a Star Trek memento to your coin or stamp collection.

It's also a great gift idea for fans of all ages! The reverse design combines detailed engraving with vibrant colour application for a colourful ode to the legacy of the U. Outer space serves as the dark background in the wide outer ring, while a rich blue colour recreates the gaseous appearance of a nebula cloud. Positioned in a circle, six different views of the Enterprise allow the viewer to examine the vessel's features from every angle: overhead, underside, bow, aft, starboard and portside.

In the engraved- only centre is the distinctive arrowhead-shaped Starfleet insignia. The stamp on the cover features a classic head-and-shoulder photo of the legendary commander of the U. Kirk (played by Canadian actor William Shatner).

Inside the custom packaging, two coil stamps bring together classic nemeses from the television series. On the left is an overhead view of what is arguably the most iconic spaceship of our time: the U. Her counterpart in the Klingon Imperial Fleet, a D7-class battle cruiser, is depicted on the second stamp, as it appeared in the episode Day of the Dove. Material: Three-ply nickel finish plated steel.

These Charges are the Buyers responsibility. This item is in the category "Coins & Paper Money\Bullion\Silver\Coins". The seller is "shockwaves-the3cccs" and is located in this country: CA.