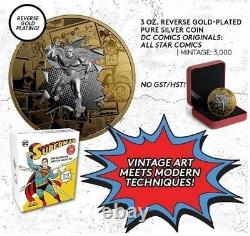 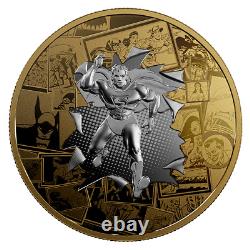 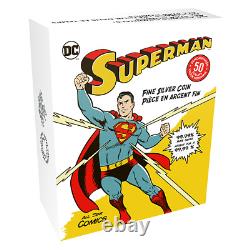 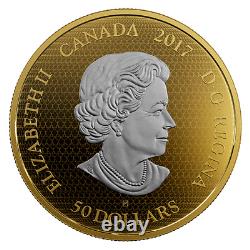 Came directly from the Royal Canadian Mint. With coin in capsule, in original government packaging and certificate.

Every great story has a beginning - The Dawn of DC Comics begins with the Golden Age. It was the Golden Age of Comics-an era that marked the debut of some of the most enduring characters of our times. Superman, Batman and Robin, Wonder Woman, The Flash and more: this 3 oz.

Fine silver coin pays tribute to the fan-favorite DC Comics Super Heroes in their earliest incarnations, as they appeared in the pages of All Star Comics. The latest in an unforgettable series! It's a historical tribute to DC Comic's greatest Super Heroes presented in their earliest incarnations. Vintage art meets modern techniques on the reverse, where traditional engraving brings Superman to life as he bursts through the laser-engraved comic book panels! Reverse gold plating: A Golden Coin for a Golden Age! The application of gold plating throughout the reverse (except for Superman at the centre) gives this fine silver coin a rich golden gleam-like the aged sepia tint of a page from an old book, but with much more vibrancy to highlight the engraved details!

Seeing is believing: The combination of engraving, plating and finishes creates a sense of dynamic motion and unbelievable texture: it looks and feels like Superman is emerging from the coin's flat surface and racing straight toward the viewer! Canadian creators Jason Fabok, Darwyn Cooke and Tom Grummett have all helped to shape Superman's history as artists/writers! The reverse design delves into the pages of vintage comic books to pay homage to DC Comics Super Heroes in their earliest forms.

Traditional engraving frames each of the laser-engraved comic book panels that appeared in early issues of DC Comics. Together, they form a stunning collage of fan-favourites, including: Superman, Wonder Woman, Batman, Robin (Dick Grayson), The Flash (Jay Garrick), Green Lantern (Alan Scott), Doctor Fate, Hawkman, Catwoman, Black Canary, The Penguin, The Joker, even the Batmobile. The reverse gold plating adds a fitting gleam and luminosity to this ode to the Golden Age of Comic Books-save for the silvery image of Superman at the centre, where a laser halftone pattern adds a modern flair as the precision-engraved "Champion of the Oppressed" bursts through the page. The obverse features the effigy of Her Majesty Queen Elizabeth II by Susanna Blunt. Material: 99.99% pure silver Finish: Proof Weight: 94.4 grams Face Value.

These Charges are the Buyers responsibility. This item is in the category "Coins & Paper Money\Bullion\Silver\Coins".

The seller is "shockwaves-the3cccs" and is located in this country: CA. This item can be shipped worldwide.