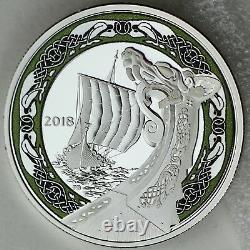 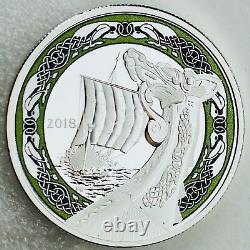 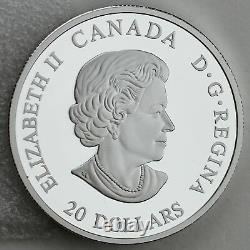 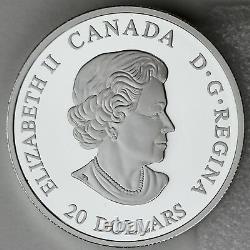 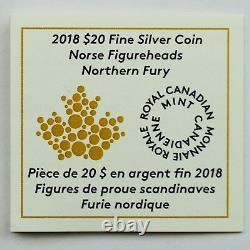 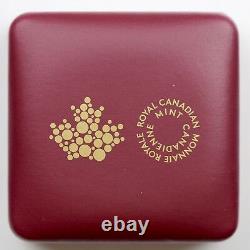 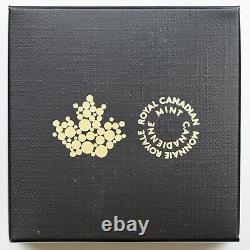 Face Value - 20 dollars (a legal tender Canadian coin). Artists - Patrick Belanger (reverse), Susanna Blunt (obverse). This troop carrier was the largest vessel in the fleet, but was remarkably light and swift for its time. While a small draft allowed it to enter shallow waterways, the dreki could either cross the seas under sail or was powered by oars during hit-and-run raids.

For the superstitious Vikings, the elaborately carved dragonhead on the prow was a talisman to keep sea monsters and evil spirits at bay. On the coin's reverse, the color-over-engraved depiction is a beautiful representation of Norse artistry and craftsmanship.

It typifies the Viking ships that brought these trader-warriors farther than ever including to Canada's easternmost shores. This coin re-imagines Viking ships as they likely appeared over 1,000 years ago! THE SHIPS THAT SAILED INTO HISTORY! This is the first coin in a three-coin series that re-visits the Viking Age.

It hearkens back to a time when the naval expertise of Norse seafarers left an imprint on history wherever their ships came ashore including Canada's east coast. Future coins in your series include. A joint celebration of the artistry and naval craftsmanship that are at the heart of an early chapter in Canadian history one that was only uncovered in the 1960s! Each coin re-imagines Viking ships, as they likely appeared a millennium ago, when a Norse encampment was established on the site of L'Anse aux Meadows , N.

A UNESCO World Heritage Site and the only authenticated Viking settlement in North America. Different frostings add nuance to the highly detailed engraving, while a selective application of color accents the outer ring!

The circular nature of the frame speaks to the timelessness of the Viking spirit, while the knot-work exemplifies the beauty of traditional Norse art. Regardless of special packaging, the Royal Canadian Mint certifies all of its collector coins! Set to only 6,000 coins for the worldwide market, this limited collectible is sure to be highly sought after. ONE-OUNCE 99.99% PURE SILVER COIN! For our Canadian customers, this coin is GST/HST exempt!

Designed by Patrick Belanger, the coin presents an artistic rendering of the dragon-headed longship (drakkar), which was regarded as a symbol of Viking power and strength. The background features a precisely engraved depiction of the wooden vessel in open waters, where the wind fills its square sail and propels it forward during a long-distance journey. A troop carrier fit for rulers and chieftains, this ornate longship is equipped with shields while its curved bow rises up towards a dragonhead prow ornament, to ward off evil spirits and sea monsters. The side view of the figurehead overlaps a green-colored frame inspired by Norse art elements, including traditional knot-work, with an integrated gripping beast motif that also adorns the Norse figurehead. The obverse features the effigy of Her Majesty Queen Elizabeth II by Susanna Blunt.

Each coin is encapsulated and presented in a Royal Canadian Mint-branded maroon clamshell protected by a black beauty box. All of the coins offered in this listing are unsearched. Many coin dealers search all coins when they are received from the Mint. They "cherry-pick" the best coins. Then submit them to be graded, certified, and slabbed by PCGS, NGC, ANACS, etc.

When a dealer searches coins, those that they sell in original Mint packaging are only lesser quality coins. Photos: When a listing offers multiples of the same coin, one coin is picked at random and photographed. Since all coins offered in that listing are essentially identical, the coin photographed is representative of all coins offered. These photos were taken through the plastic cling film that protects the coins; any dust, etc. On the outside surface of the capsules doesnt affect the coins.

Surface areas that appear black on some proof coin photos are actually highly polished, mirror-bright metal reflecting the color of the camera. We place the coin at an angle, in some photos, to better depict the mirror bright finishes. However, angling the coin usually results in one side of the coin being slightly out of focus. Whenever possible, we use actual photos of our coins, rather than just artists conception drawings from the Mint.