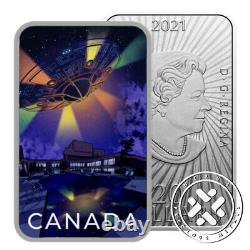 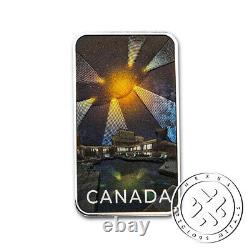 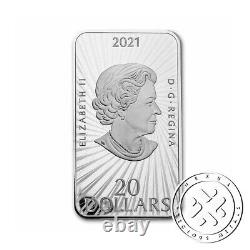 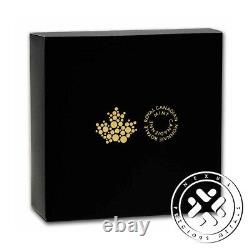 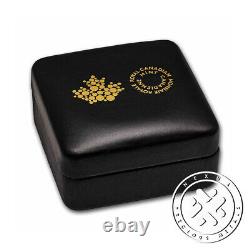 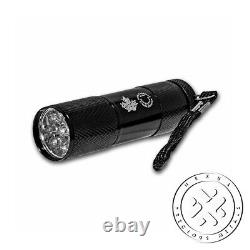 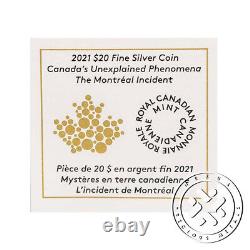 Dubbed the "Montréal Incident, " this famous UFO sighting has been re-created on the fourth Unexplained Phenomena coin. Its colorful, glow-in-the-dark design transports you to the rooftop pool at the Hôtel Bonaventure Montréal on the night of November 7, 1990. When a mysterious object suddenly appeared in the sky. On the coin, the UFO's light beams are enhanced with black light paint technology. Which is activated by the flashlight that comes with your coin. There is even engineered a Fresnel optical effect that alters that way light reflects on the coin. Depending on your viewing angle-tilt the coin and you'll see! Comes in a black clamshell box with a custom black beauty box. Limited mintage of 5,000 coins. Obverse: Right-facing profile of Queen Elizabeth II. Reverse: The reverse design by Canadian graphic design artist Patrick Belanger features the artist's rendition of an aerial UFO phenomenon that occurred on November 7, 1990 in Montréal, Que. The colourful image shows the event from the perspective of those who spotted the object from the rooftop pool at the Hôtel Bonaventure Montréal. The object's bright light beams are amplified by black light paint technology and an engineered Fresnel effect, which varies the intensity of reflected light depending on the viewing angle. Guaranteed by the Royal Canadian Mint.

Protect your Silver in storage from the adverse effects of moisture in the air by adding these silica gel packets to your order. Add this 2021 Canada 1 oz Silver Unexplained Phenomena The Montreal Incident coin to your cart today!

November 7, 1990, 7:20 p. A tourist was enjoying a relaxing swim in the rooftop pool of the Hôtel Bonaventure Montréal, when suddenly, green and yellow light beams emanating from a large, metallic object lit up the night sky. The woman alerted the lifeguard, who called the hotel's security guard; soon, guests, hotel staff and management had gathered to view this anomalous aerial object, which continued to hover in place. When the light beams suddenly became brighter, police were called in.

Baffled, the first officer on the scene contacted his superiors, and before long, the Royal Canadian Mounted Police, the Canadian military and even NASA (National Aeronautics and Space Administration) were reportedly looking into this strange object. Dense cloud cover obscured the view of the UFO, but photographs taken by a journalist provide compelling physical evidence of this unexplained phenomenon. Since 1908, the Royal Canadian Mint has been a world leader in producing high-quality coins.

They are most well known for the Silver and Gold Maple Leaf coins, but they have also produced numerous award-winning coins and are one of the most innovative mints in the world. The RCM releases new, high-quality coins every month. Browse new and upcoming Royal Canadian Mint products frequently to see updates. Mint Mark:RCM (Not Shown). Metal Content:1 troy oz.

From unusual sightings to strange encounters, this series of colourful coins brings you some of Canada's most fascinating tales of unexplained phenomena. Coin #4 features a colourful re-telling of the Montréal Incident in November 1990, when a UFO was spotted from the rooftop pool at the Hôtel Bonaventure Montréal. A MINT FIRST: FRESNEL BEAMS! On your coin's reverse, the UFO's light beams are enhanced by a Fresnel optical effect-a first for us!

An array of features has been engineered in a way that alters the way the light reflects off the coin, so that it appears to move in, out and across the beams depending on your viewing angle. The UFO's bright light beams colourfully lit up the night sky, and they certainly do on your coin's reverse. Your coin comes with a black light flashlight that activates the embedded black light paint technology, which emphasizes the outline of the UFO and adds an intense, colourful glow to the light beams that are also reflected on the pool surface. Like the 2019 coin that depicted the Shag Harbour Incident, this 1 oz.

99.99% pure silver rectangular coin features a vertical orientation that emphasizes height. It shows the UFO hovering in place above the rooftop pool of the 17-storey building, high above Montréal's busy downtown core. The obverse's engraved field pattern is a nod to the reverse design, and to the mysterious light beams that were observed by multiple witnesses on the night of November 7, 1990. ONE OF OUR MOST POPULAR THEMES! Collectors love a good UFO story.

Whether you're fascinated by UFOs, or you just love a colourful coin that tells a great story, this coin is for you. Of 99.99% pure silver, this rectangular coin is a fun addition to any collection and makes a great gift. The Royal Canadian Mint certifies all of its collector coins. This item is in the category "Coins & Paper Money\Bullion\Silver\Coins". The seller is "nexuspreciousmetals" and is located in this country: US.