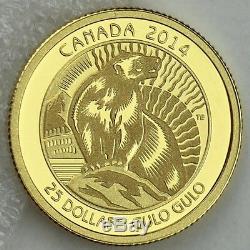 The wolverine is the largest member of the Mustelidae (weasel) family. This stout animal enjoys a fearsome "tough guy" reputation. Much of the wolverine's notoriety can be attributed to its secretive ways, low population density, and remote northerly range in central and western Canada. It's one of North Americas least understood animals. As researchers continue to study the wolverine, they are discovering it is one of nature's great powerhouses. The wolverine's strength is far beyond its stature. Its powerful jaws can bite through moose tibia, and its teeth have evolved to eat frozen meat and bones. It has long, semi-retractable claws that it uses primarily for digging and climbing.

While the wolverine is known to ferociously defend its food from larger predators, it is primarily a scavenger rather than a hunter of live prey. A variety of finishes creates this distinctive wood block portrait of the wolverine in its habitat. Third and last issue in the Royal Canadian Mint's exciting Untamed Canada series, this coin showcases five different coin finishes.

Each finish offers a separate degree of luster and exceptional engraving techniques for this example of woodblock-inspired art. This coin is a dramatic approach to coin design, inspired by the untamed nature of the wolverine. Makes a beautiful gift, or a distinguished addition to any fine gold coin display. Limited worldwide mintage of only 1,500 coins. This coin was designed by Canadian artist Tivadar Bote.

It features a woodblock-style portrait of a wolverine set against a sunburst motif, which presents symbolic elements of the wolverine's Canadian habitat. The outer frame is engraved with the species' Latin name, " Gulo Gulo , " the word "CANADA, " the date "2014, " and the face value of 25 DOLLARS. Each coin is encapsulated and presented in a Royal Canadian Mint-branded maroon clam-shell case protected by a black beauty box.

Are also available for an additional charge. Check out my other items.

Be sure to add me to your favorites list. Unsearched All of the coins offered in this listing are unsearched. Many coin dealers search all coins when they are received from the Mint. They "cherry-pick" the best coins. Then submit them to be graded, certified, and slabbed by PCGS, NGC, ANACS, etc.

Whenever possible, we use actual photos of our coins, rather than just stock artwork from the Mint. We frequently update and upgrade the photos that appear with our listings, using improved cameras and lenses and better lighting. We will honor your requests for additional photos as quickly as our schedule permits. The item "Canada 2014 $25 Wolverine Untamed Canada #3 1/4 oz. 99.99% Pure Gold Proof" is in sale since Friday, March 14, 2014.