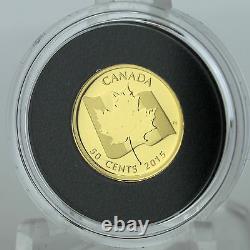 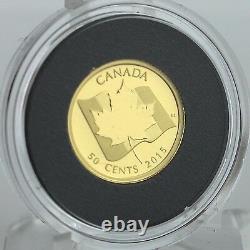 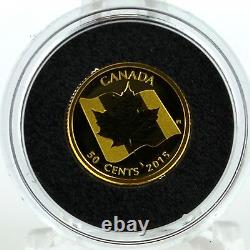 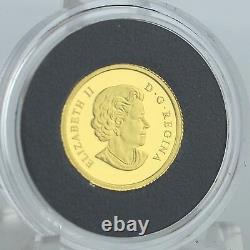 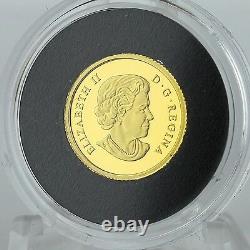 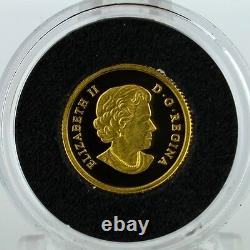 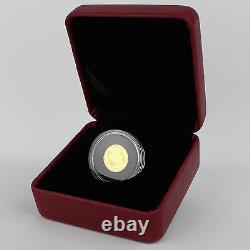 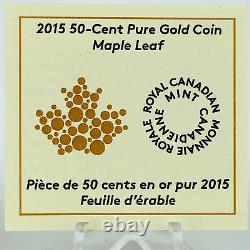 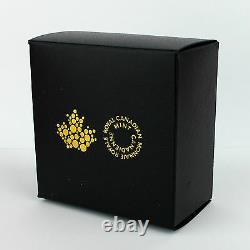 2015 Maple Leaf with Canada Flag 1/25 oz. All coins offered in this listing are unsearched!

Since it was first raised in 1965, the National Flag of Canada has come to symbolize many of the values and opportunities that have defined Canada and its people! To Canadians at home and abroad, the red maple leaf unites and instills a sense of belonging regardless of different cultures, languages, and beliefs. The Royal Canadian Mint celebrates the National Flag of Canada's 50th anniversary with a gold coin that pays tribute to Canadas national symbol: the maple leaf.

The flag of Canada beautifully engraved in pure gold, an ideal gift for Canadians or anyone wanting Canadian memorabilia. This small, affordable gold coin allows collectors to celebrate the 50th anniversary of the National Flag of Canada. Struck in 99.99% pure gold, this is the 13th in the Royal Canadian Mint's annual 1/25th oz. Highly detailed engraving on this remarkably small-sized coin is testament to the artistry and craftsmanship for which the Royal Canadian Mint is internationally renowned. From its delicate veins to the small creases and textures, meticulous engraving gives the maple leaf a life-like appearance that is further enhanced by the use of multiple finishing techniques.

For our Canadian customers, this coin is GST/HST exempt. The reverse design by Canadian artist Pierre Leduc draws its inspiration from Canada's national flag, which is seen in the background as it flutters in the wind. From its centre emerges a sugar maple leaf, which served as the original inspiration for the flag's stylized centrepiece. Finely detailed engraving recreates the leaf's five veined lobes and creates a natural, life-like appearance, which is further enhanced by the use of multiple finishing techniques.

The adoption of a national flag was proposed as far back as the late nineteenth century, but to no avail - that is, until the idea was raised again in 1964 by Prime Minister Lester B. After much divisive debate, the National Flag of Canada was approved by Parliament in 1964. At the stroke of noon on February 15, 1965, the Canadian Red Ensign (Canada's previous flag) was lowered on Parliament Hill and replaced by the National Flag of Canada!

The official way to describe the flag is by explaining it as a red flag with a white square in its centre, which is adorned with a red maple leaf. The design is symmetrical - if you fold the flag from one red edge to the other, both halves should be the same! Although often assumed to be a sugar maple leaf because of its color, the leaf on the flag is in fact a stylized leaf intended to represent the several species of maple that grow throughout Canada. Now, in a unique twist, the leaf is featured in a design that is inspired by the flag!

The sugar maple leaf is depicted emerging from a fluttering flag to fill the centre of the image field. Finely detailed engraving recreates the leaf's veined lobes to give the leaf a natural, life-like appearance that celebrates both the flag and the national symbol! Each coin is encapsulated and presented in a Royal Canadian Mint-branded maroon clam-shell protected by a black beauty box. Unsearched All of the coins offered in this listing are unsearched. Many coin dealers search all coins when they are received from the Mint.

They "cherry-pick" the best coins. Then submit them to be graded, certified, and slabbed by PCGS, NGC, ANACS, etc.

When a dealer searches coins, those that they sell in original Mint packaging are only lesser quality coins. Photos: When a listing offers multiples of the same coin, one coin is picked at random and photographed. Since all coins offered in that listing are essentially identical, the coin photographed is representative of all coins offered.

Surface areas that appear black on some proof coin photos are actually highly polished, mirror-bright metal reflecting the color of the camera. Whenever possible, we use actual photos of our coins, rather than just artists conception drawings from the Mint.